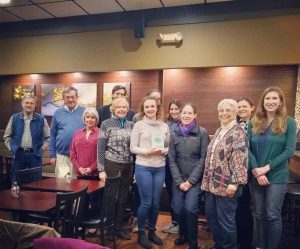 On Thursday, January 3rd, thirteen members of the book club met to discuss Walden by Henry David Thoreau, our December 2018 selection, rounding out our Fall 2018 Series. I tend to strategically assign one of our classics for our December meetings, and Walden proved the perfect opportunity for members to reflect on simple living and the socio-political environment that enabled Thoreau’s famous philosophical experiment in the 1840s. We were almost universally in agreement in criticism of Thoreau’s haughty observations of his fellow citizens, and his tendency to make sweeping proclamations rooted in largely parochial observations. Despite the impracticality of his lifestyle (which he himself abandoned after two years), no one faulted his transporting prose on the magic and beauty of nature, covering all four seasons, all manner of flora and fauna, and above all, Walden Pond itself. We reflected on our different experiences reading the text now, versus in high school or college, and agreed that the text survives as an ode to conservation, and as a reminder to us all that the great outdoors should not be something divorced from our everyday experience of the world, something we drive to, rather than live within.