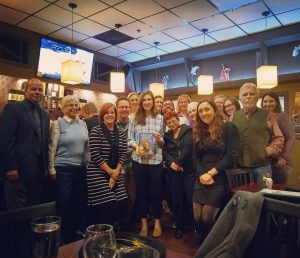 Sixteen members of the book club gathered on Tuesday, November 27 to reflect on Trevor Noah’s Born a Crime: Stories from a South African Childhood. The book‘s star power brought out a big crowd, and we discussed a whole host of topics spanning the details of Noah’s experience with the legacy of apartheid, his mother’s impact on his worldview, and his reflections on the socio-economic factors that informed his early years. Nearly universally beloved by the group despite hang ups with the narrative structure, the recounting is honest, insightful, and wrapped in comedic wit.

On November 13, four members of the book club met for a discussion of Salt: A World History by Mark Kurlansky (nonfiction). We decided to dedicate a bonus meeting this Series to Salt, as it continued to reappear on recommendation lists but hadn’t been voted in as part of a series yet. This book dives into the origin of the salt trade, its chronological historical value, and the role salt played in key moments of world history, such as the formation of the Hanseatic League and the Union’s victory in the American Civil War. Though we took issue with its structure and disjointed narrative, we recommend this selection for anyone interested in history and the culinary arts- Kurlansky sprinkles recipes from many ages and cultures throughout.