The Greek letters ΦΒΚ stand for “The Love of Learning is the Guide of Life.” This is a fitting maxim for our nation’s oldest academic honor society. The DC Area Phi Beta Kappa Association believes in passing our passion for knowledge and its enrichment on to younger members of our communities.  Since 1974 DCPBK has sponsored a High School Awards Program to encourage excellence, creativity, and industry among the diverse student population attending the public and charter schools in our area.

Every year our members select deserving high school seniors in the District and nearby Virginia and Maryland to recognize their scholastic achievements and community service.  This Program has become the centerpiece of the Association’s commitment to our community, and in recent years DCPBK has offered up to four awards to college-bound seniors of $1,000 each. Contributions to the High School Award Program from our members and supporters are gratefully received.

Honorees are recognized at a reception each spring and are presented with a book pertinent to their future course of study as well as a Phi Beta Kappa Certificate of Recognition. Due to the ongoing public health crisis, we did not hold award ceremonies in 2020 or 2021.

In 2019, Mark Vlasic served as our featured speaker. Professor Vlasic is a Professor at Georgetown Law, and has experience working in the White House, the Pentagon, the World Bank, the United Nations, and a large international law firm. In addition to insights on international law, Mark gave our award winners and other attendees helpful advice on learning from and persevering through failure.

In 2018, our featured speaker was Ambassador Miriam (“Mimi”) Hughes, who spoke on the importance of following one’s compass. The full text of her speech can be found here.

The application for our 2021 award is now closed.

The students receiving our award must show a commitment to the values and mission of Phi Beta Kappa, including academic achievement, community involvement, and a dedication to the liberal arts and sciences. Upon selection, D.C. PBK will ask each recipient for a letter of acceptance from their chosen college or university. Questions about the award can be sent to Mackenzie Fusco at awards@dcpbk.org.

Note: Applicants must have a 3.5 unweighted GPA to apply. 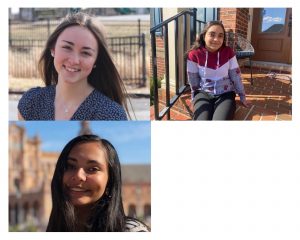 Cate Schultz attends Bethesda-Chevy Chase High School in Maryland. Cate founded and currently leads the Greentree Outdoor Education and Recreation program to encourage positive interactions with nature for children experiencing homelessness. She has worked as an intern with Impact(Ed) International, a workshop teacher with the Children’s Defense Fund Freedom School Workshop, and a Farm Director with Urban Beet. Cate is also a traditional Irish dancer and dance teacher. Cate will be attending the University of North Carolina at Chapel Hill’s Honors Carolina and Excel@Carolina Pre-Masters in Education programs, where she will study environmental studies and elementary education.

Ekene Chukwueke attends E.L. Haynes Public Charter School in Washington, DC. Ekene has worked as a Research Assistant at Children’s National Hospital, McClendon Center, and The Johns Hopkins Hospital. He has also served as a Registered Nurse (RN) Assistant at MedStar Washington Hospital Center and as a Volunteer at Carroll Manor Nursing & Rehabilitation Center. At E.L. Haynes, Ekene is President of the Boys to Men Mentoring Program, Art Club, and Environmental Club, and President & Founder of the Research Institute Club. Ekene will be attending Harvard College, where he is considering concentratingin government, sociology, and/or history.
Gwen Setia attends James Madison High School in Virginia. Gwen is the co-founder of the JMHS ESOL Advocacy Organization, which she started to address the disparity in standardized test pass rates among ESOL students at JMHS. She has lobbied with Team ENOUGH Virginia Lobbying Collective, interned with Elaine Luria for Congress, and was a Digital Fellow with Team Warner & the Virginia Coordinated Campaign. Gwen is the Editor-in-Chief of the JMHS Montpelier Yearbook Staff and President of the Young Democrats. Gwen will be attendingNorthwestern University, where she plans to double-major in economics and political science.
Roma Dhingra attends Poolesville High School in Maryland. Roma is the founder of the Poolesville Combating Childhood Cancer Club (C4), which has raised money for childhood cancer research and toys for young cancer patients and recently hosted an online seminar about cancer treatment and childhood cancer awareness. She has completed Research Internships at Johns Hopkins Bloomberg School of Public Health and CVPath Institute, and has volunteered at Walter Reed’s Pediatric Oncology Clinic. Roma is also a First-Degree black belt in Tang Doo So Karate. Roma will be attending Georgetown University, where she plans to study the biology of global health. 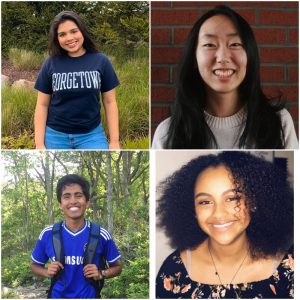 Anikait Dhond attended Lake Braddock Secondary School in Burke, VA. An avid environmentalist, Anikait uses his YouTube channel, Danikat Fishing, to explore local waterways and highlight fishing methods that minimize ecological damage. Anikait led an effort to Adopt-a-Highway in his local community and was the recipient of the VA Governor’s Stewardship Award for Land and Water Conservation. He was Captain of the Club Soccer Braddock Road Youth Club and Lake Braddock Varsity Tennis Team, as well as a volunteer soccer coach for DC Scores and a talented french horn player. He attends Georgia Tech, where he studies biological systems engineering.

Emmy Song attended Montgomery Blair High School in Silver Spring, MD. Emmy uses creative writing to speak out about social issues and has had her writing published in 24 print/online magazines, such as Writing for Peace, Pulitzer Center, and National Poets Quarterly. She was the Editor-in-Chief of the student newspaper and an online literary magazine. In addition to her passion for writing, Emmy founded interGIRLS, a national organization that supports women in math, and brainpowHER, a weekly programming class for middle school girls. Emmy is also a violist in the Maryland Classic Youth Orchestra. She attends Princeton University, where she studies mathematics and economics.

Riya Maheshwari attended Rock Ridge High School in Ashburn, VA. Riya has spent over 300 hours as an Emergency Room and Labor/Delivery Volunteer at StoneSprings Hospital Center and participated in George Washington University’s Medical Laboratory Sciences Program. As a Bank of America Student Leader, she helped develop a program at the YMCA to expose youth to medical careers. Riya participated in her school’s first foreign exchange to Durban, South Africa and she served as a Global Ambassador at her school, welcoming foreign exchange students to the DMV. Riya attends Georgetown University, where she studies human science on the pre-med track.

Sosina Gebremichael attended Benjamin Banneker High School in Washington, DC. She founded a Financial Literacy Club and a Coding Club at her school and helped develop a Community Organizing for Racial Equity program at the Latin American Youth Center to engage youth in racial justice advocacy. Sosina was appointed to lobby alongside the president of College Board to increase funding and access to the AP curriculum for low income and rural areas. Additionally, Sosina has completed coursework at Columbia University and Northwestern University in Psychology and Microeconomics. She attends American University, where she studies Mathematics-Economics and Computer Science. 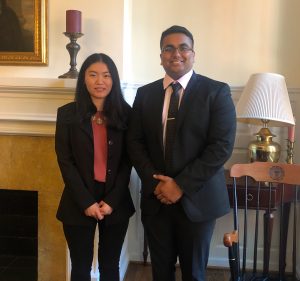 was the President of Future Business Leaders of America, the Key Club, and Rho Kappa National Social Studies Honor Society, as well as a Co-Founder of Peers and Students Taking Action, a nonprofit organization supporting children and families in Loudoun County. Praneeth worked as a Volunteer Firefighter/EMT for the Ashburn Volunteer Fire and Rescue Department. He attends the University of Virginia and studies Global Development and Commerce with an Entrepreneurship Track.

Nina Tang is from Germantown, MD and attended Poolesville High School. She was the founder and captain of the FIRST Tech Challenge (FTC) Team #13100 and founder of a STEM outreach program for young children at the Maggie Nightingale Library. Nina has worked as a Research Intern at the University of Maryland and the National Institute of Standards & Technology. She is an award-winning pianist and self-taught Korean speaker. Nina attends Cornell University, where she studies Computer Science and minors in a foreign language.

Maya Woods-Arthur (not pictured) is from Washington, DC and attended Washington Latin Public Charter School. She spent a month studying political science at the St. Albans School of Public Service and was the first ever high school intern at the National Museum of African American History and Culture. Maya earned the Girl Scout Gold Award and worked as a Girl Scout Congressional Aide to Congresswoman Norton of DC. She attends Harvard University, where she studies politics and the Middle East.

*Maya was the recipient of the Ambassador Andrew L. Steigman Merit Award, an award honoring the memory of our distinguished late colleague and past President. 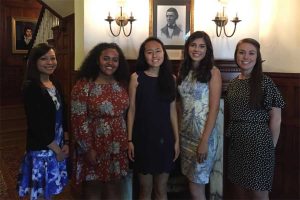 Lauren Espinoza is from Rockville, MD, and attended Montgomery Blair High School. She served as team leader for the FIRST Robotics Competition Team 449 and was a research intern for the National Heart, Lung, and Blood Institute where she analyzed single- photon emission computed tomography (SPECT). Lauren was active in the Keep America Beautiful Youth Advisory Council, Montgomery County Commission on Children and Youth, and the Girl Scouts. She attends Harvard University and plans to study both economics and Near Eastern languages and civilizations in preparation for law school.

Sheyda Tribble is from Washington, DC, and was dually enrolled at School Without Walls and The George Washington University (GWU) Early College Program. On campus, Sheyda was an anchor on a political radio show for the student- run station WRGW and an active member of GWU’s NAACP chapter. She is an active photographer and poet and recently self-published her own book of poems, Adolescence: Poetry and Musings of a Young, Black Girl. She attends Northwestern University and studies economics and international studies.

News From Past Winners 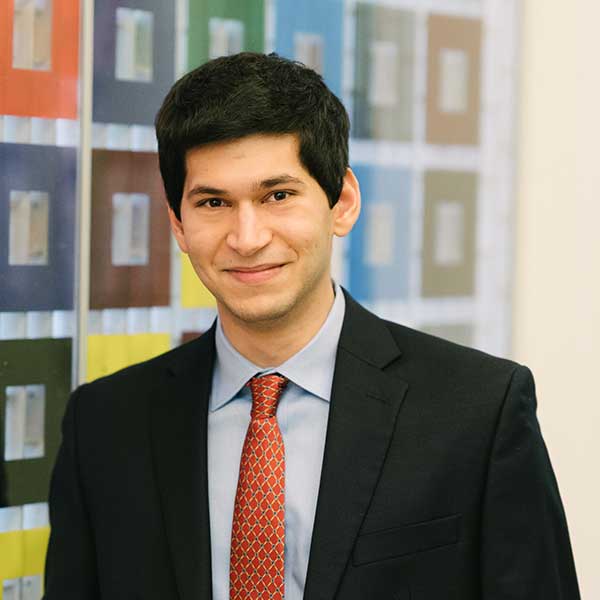 “I would like to thank you again for selecting me in 2014 for the DC PBK [High School] Merit Award. I recently graduated from Dartmouth College, summa cum laude, majoring in mathematics, with a minor in physics, and was 1 of 22 members of the Class of 2018 to be inducted early into Phi Beta Kappa. Your honor was quite prescient! This upcoming year, I will be in Cambridge, UK, as 1 of 16 Churchill scholars selected nationwide, studying for a master’s in pure mathematics. Thank you again for giving me a vote of confidence 4 years ago, and I hope the award continues to support many worthy students to come!”

The High School Awards program is made possible by generous financial contributions from our members and supporters. In the past, the program has benefitted greatly from the commitment of members like Mary Corinne Rosebrook, who served on the High School Awards committee until 1989, and was still tutoring young D.C. pupils upon her 100th birthday in 1993.  Another important supporter was Ruth Knee, who dedicated significant time and energy to ensure the success of the program until her death in 2008.  More recently, a longstanding member of DCPBK has included a substantial legacy endowment to the High School Awards Program in her will in order to secure its future income.

To continue this important tradition and contribute to the High School Awards Program you may make a current donation online by using the Donate button below or send your check, payable to the DC Area Phi Beta Kappa Association, with “High School Awards” in the memo field, to:

Questions can be directed to treasurer@dcpbk.org.

Contributions of $50 or more will be recognized in our awards ceremony program. Legacy donations and endowments are also welcome.  Please contact the Treasurer about crafting an expression of your future gift.

Information collected from applicants to the High School Awards Program will only be shared with the permission of the applicant. Applicants who are selected for the award will be contacted for photos and testimonials for our website and newsletter. Applicants will not receive other emails or solicitations of any sort. Any questions can be directed to awards@dcpbk.org.